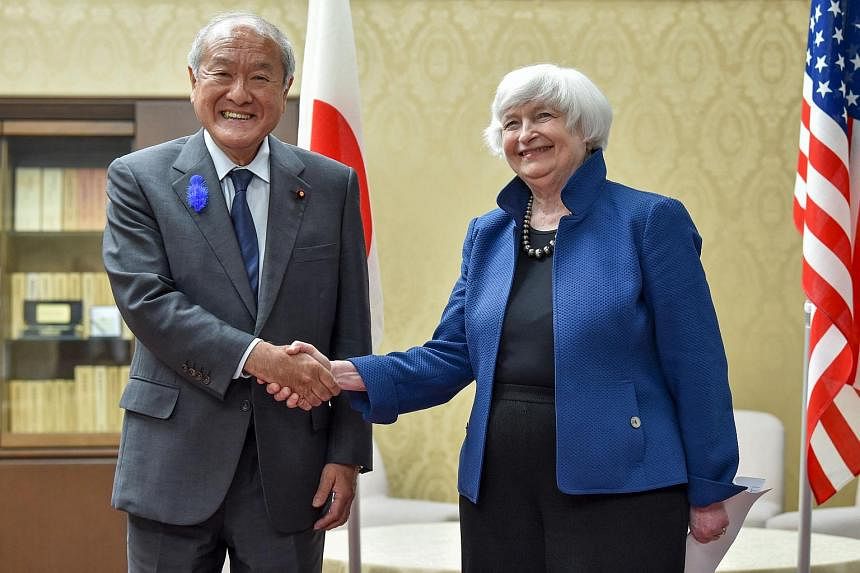 “The economic fallout from Russia’s invasion has raised exchange rate volatility, which can have adverse implications for economic and financial stability,” Dr Yellen and Finance Minister Shunichi Suzuki said in a joint statement after meeting in Tokyo.

“We will continue to consult closely on exchange markets and cooperate as appropriate on currency issues, in line with our G-7 and G-20 commitments.”

The US Treasury chief has championed the idea as a way to keep oil flowing to global markets while limiting the revenue the Kremlin gets to continue pursuing its Ukraine invasion.

The duo met after the yen tumbled overnight to its weakest against the dollar since 1998. Japan’s government has expressed concern about the slide, which has made energy imports all the more expensive and undermined Japanese households’ purchasing power.

The yen’s fall has stoked speculation that Japan could intervene to prop up its currency, perhaps in concert with the US. The last time the two nations intervened jointly to support the yen was in 1998.

Speaking to reporters after the release of the statement, Mr Suzuki said he explained Japan’s currency situation to Dr Yellen and gained her understanding. He reiterated the government’s view that it is concerned about sudden yen weakness, but largely stuck close to the language of previous warnings. That suggests Japan is still a ways from trying to directly take action.

A senior US Treasury official, speaking with reporters in Tokyo, noted that while prior Group of 20 (G-20) agreements commit members to respect market-based exchange rates, the language also allows for countries to address “excessive volatility or disorderly movements” that can negatively affect economies and financial stability.

The official emphasised, however, that Tuesday’s joint US-Japan statement does not say that Japan currently faces excessive volatility or disorderly movements. Nor is the statement an acknowledgment by Dr Yellen that Tokyo would be justified in intervening in currency markets.

It only states that the two countries will continue to monitor and discuss exchange rates, the official said.

The yen, which had strengthened a touch against the dollar after the release of the statement, returned to its earlier level after the Treasury official’s remark.

Market participants argue such a move would have little lasting effect now, given sharply divergent American and Japanese monetary policies.

While the Federal Reserve is in the midst of conducting its most aggressive series of interest rate hikes in decades, the Bank of Japan has stood pat, with its target of near-zero yields for 10-year government bonds unchanged.

Japan and other nations reliant on foreign energy imports have seen their trade balances deteriorate since Russia’s invasion of Ukraine – one reason their exchange rates are sliding.