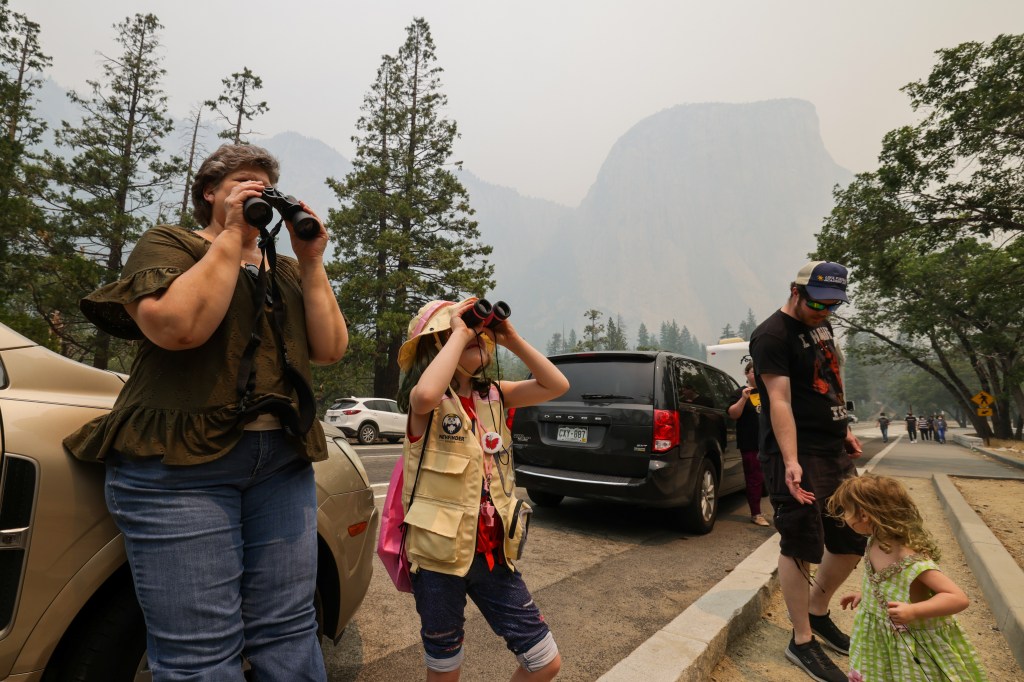 YOSEMITE NATIONAL PARK — Firefighters started to gain ground Monday on the fire burning near Yosemite National Park’s famed Mariposa Grove of giant sequoias and within 1 mile of the historic Wawona Hotel, but the smoke choking the air and marring the usually breathtaking vistas across the park disrupted vacation plans for thousands of visitors.

Madison Swaley and her four friends drove out from Utah to spend four days camping and hiking in Yosemite but were among the the many parkgoers who decided to cut their trip short or cancel altogether.

“When we got into the park it ended up being a lot smokier than we’d thought,” said Swaley, 23, who owns a marketing company in Salt Lake City. “You can feel it in your lungs.”

The blaze is the latest in a series of calamities that have struck a blow to tourism in one of the nation’s most treasured parks.

Amid the hazy skies, crews battling the Washburn Fire, which began Thursday and had grown to 2,720 acres, had some good news to report Monday. No structures had burned. There were no reports of injuries. And commanders said the fire was 22% contained.

Also, firefighters have been able to keep the blaze from destroying any of the 500 or so giant ancient sequoias that tower more than 200 feet tall and which were first protected by Abraham Lincoln in 1864.

“They are starting to make a little bit of progress,” said Marc Peebles, a spokesman for the agencies fighting the fire.

Still, Peebles warned, the blaze could burn for many days more or even weeks.

Matt Ahearn, deputy operations chief on the fire, said that hand lines that fire crews had cut — areas where they removed vegetation down to the bare soil — were working to hold the fire perimeter along the edges of Mariposa Grove.

Inside the giant sequoia grove, fire crews set up sprinkler systems to protect the ancient trees. They used fire-resistant foil to wrap a historic cabin that was once home to the park’s first ranger, Galen Clark, 150 years ago.

By midday Monday, 545 firefighters and 10 helicopters were battling the blaze, which was first reported near the trailhead at Mariposa Grove. Its cause remains unknown.

The southern entrance to Yosemite along Highway 41 remained closed Monday, and the community of Wawona remained evacuated. The rest of Yosemite was open, including Yosemite Valley and the High Country and all of the park’s campgrounds and hotels outside the Wawona area.

But the fire and its sometimes thick smoke — which varied hour-by-hour depending on shifting winds and weather conditions — played havoc with the vacation plans of thousands of people who were visiting or planning to visit during the park’s busiest tourist season.

“We were getting calls all day long yesterday — people wanting to cancel,” said Kaitlyn Thomas, front desk manager at the Best Western motel in the town of Mariposa, west of the park entrance at El Portal.

“They didn’t want to come up here and be affected by the smoke,” she said.

But the motel remained fully booked Monday, managers said, because helicopter crews checked in, and some guests who were staying at Oakhurst, near the closed south entrance to the park, switched plans.

The Washburn Fire is the latest in a string of closures and setbacks for Yosemite and its surrounding communities. In 2018, the park closed for two weeks due to choking smoke from the Ferguson Fire. In early 2019, a government shutdown furloughed park employees and closed restrooms, visitor centers and other facilities for a month.

In 2020, the park closed for two months when the COVID pandemic began. It reopened with a reservation system to limit visitors. Then it closed again for 10 days in July when the Creek Fire, burning in Fresno County, filled Yosemite Valley with thick, hazardous smoke.

The park kept a reservation system last year during COVID and retained it again this year due to a large number of construction projects to renovate roads and campgrounds.

“We’re doing the best we can,” said Jonathan Farrington, executive director of the Yosemite Mariposa County Tourism Bureau. “We are a tourism-based economy, so it’s tough. I would encourage people when the smoke clears to come on back as quick as they can.”

Farrington noted that Yosemite is the same size as Rhode Island,and that parts of the park, such as the High County, are a long way from the fire near Mariposa Grove.

“If periodic smoke isn’t going to be an issue for you, there’s a lot to see and do,” he said.

A fair number of visitors stuck it out.

Since Christmas, Mark Sunderlin and his wife, Eva, from Phoenix had been planning their first-ever trip to Yosemite to meet up with his son and daughter-in-law and their four children from Colorado.

It wasn’t until the couple left Arizona on Saturday that they learned part of the park was ablaze.

“We thought, ‘Well, it’s a little late to cancel,’” said Sunderlin, 56, a technology director for a charter school.

“You can just see a little bit of the beauty — you know it’s there but you don’t get to see it all,” he said, shooting photos near El Capitan. “I have to look at the positive side: My pictures are going to be different from just about anyone else’s that comes to the park.”

Greg Coit, 33, has been working in Yosemite for a decade, first as a climbing guide, now as a construction contractor. Monday’s smaller crowds from the smoky air made the day’s job installing signs a bit easier — but when the smoke gets really bad in fire season, he and his crews have to stop working. He looked up at the thick haze filling the valley.

Part of the challenge for firefighters all week has been the condition of the forests. Although park officials have conducted controlled burns in Mariposa Grove for more than 50 years to reduce dead wood and brush that could fuel high-intensity fires, hundreds of thousands of acres of other forests around the iconic grove, filled with sugar pines, white firs and other trees, are at risk.

Some have not burned for generations. Others in the park and in national forests across the Sierra Nevada have been severely weakened by drought. California has experienced serious drought conditions in eight of the past 11 years, made worse by hotter temperatures from the warming climate.

“We had some rain that happened in April but other than that, the winter was bone dry,” said Andy Bollenbacher, a National Weather Service meteorologist in Hanford.

In 2019, the last year before the current drought began, Yosemite Valley received 34.1 inches of precipitation from January through the end of May. This year, only 5.23 inches fell over the same period.

“It’s a dramatically, dramatically different year,” he added. “The drought is just dreadful up there. It’s awful.”