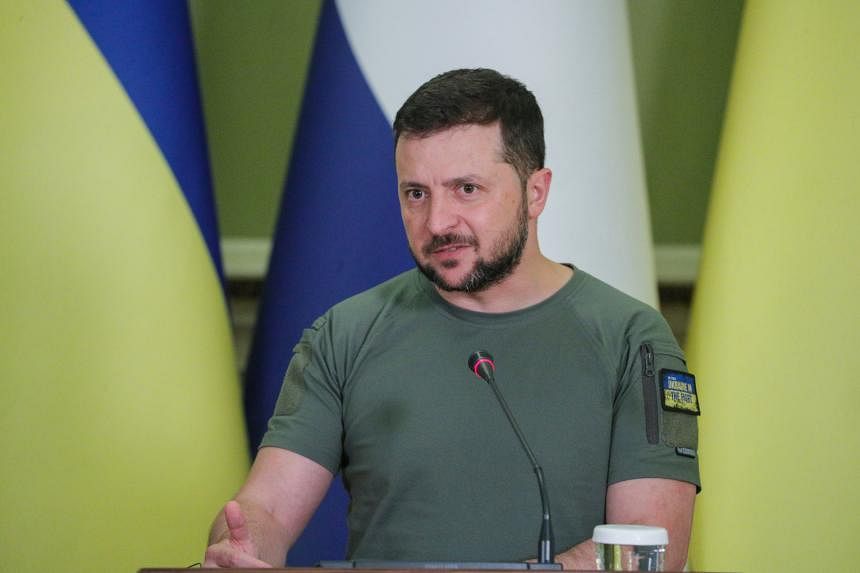 KYIV  (NYTIMES) – President Volodymyr Zelensky of Ukraine fired his country’s prosecutor general and the leader of its domestic intelligence agency on Sunday (July 17), the most significant shake-up in his government since the start of the full-scale Russian invasion in February.

The dismissals of the prosecutor general, Ms Iryna Venediktova, and Mr Ivan Bakanov, leader of the Security Service of Ukraine – and a childhood friend of the president – were announced in brief decrees.

In a televised speech later Sunday, Mr Zelensky said he was responding to a large number of treason investigations opened into employees of law enforcement agencies, including the prosecutor general’s office and the domestic security agency.

Mr Zelensky’s office ordered that Ms Venediktova, who had assumed a prominent and very public role in Ukraine’s efforts to prosecute Russian war crimes and atrocities, be removed from her position.

Another decree did the same for Mr Bakanov, citing “Article 47 of the Disciplinary Statute of the Armed Forces of Ukraine”. That pertains to “failure to perform service duties, which led to human casualties or other grave consequences,” according to Ukrinform, a Ukrainian news agency.

A total of 651 cases of high treason had been opened against law enforcement personnel, Mr Zelensky said in his speech. More than 60 employees of the prosecutor’s office and the Security Service of Ukraine remained in occupied territory and were working against the state, he added.

“Such an array of crimes against the foundations of the national security of the state and the connections detected between the employees of the security forces of Ukraine and the special services of Russia pose very serious questions to the relevant leadership,” Mr Zelensky said.

Before the invasion, most of Mr Zelensky’s Cabinet had been a revolving door. But after it, senior personnel changes had been rare – until Sunday’s firing of the two top law enforcement officials.

Mr Zelensky’s relationship with Mr Bakanov dates back decades. Childhood friends, the two also worked in the entertainment industry – Mr Zelensky as an actor and Mr Bakanov as the director of the Kvartal 95 studio.

Mr Bakanov was one of several comedy industry veterans to follow Mr Zelensky into government. Yet despite scepticism about their competence that was voiced by political opponents at home before Russia invaded Ukraine, Mr Zelensky’s government defied expectations by maintaining operations and coordinating the country’s defence through the chaotic early months of the war.

But other officials in Mr Zelensky’s government had blamed Mr Bakanov for intelligence failures and for missteps that allowed the Russian army to capture the city of Kherson in the south of Ukraine with almost no fighting, Politico reported in June.

After Ms Venediktova was fired on Sunday, a court ordered the country’s top anti-corruption agency, the National Anti-Corruption Bureau of Ukraine, to investigate her failure to report property on an asset and income declaration that officials are required to submit.

While it was not immediately clear who would replace Mr Bakanov, the president’s office named Mr Oleksiy Symonenko as acting prosecutor general, according to Ukrinform.

Mr Symonenko had served as Ms Venediktova’s deputy. In 2020, he was accused by the National Anti-Corruption Bureau of Ukraine of “illegally” interfering in a corruption investigation.